The biggest difficulty we face with little black sugar ants control is that they are such versatile things. They will nest in almost anything. Outside they will be in the ground in trees, in mulch, in cracks in sidewalks, driveways, in rotted wood, under rocks, etc. Inside, little large big black ants will nest in woodwork, masonry, wall voids, even under carpets. They eat everything. Sweets, vegetables, fruits, meats, dead insects, plant secretions, grease. They’ll even eat honeydew, which is a secretion given off by plant suckers like aphids scales.

Household ants problems no wings to fly pictures identification  description,Learn facts about Types of ants-Signs of activity in homes buildings.

Carpenter ants reside both outdoors indoors in moist, decaying or hollow wood. They carve “galleries” into the wood grain to provide passageways for movement from section to section of the nest. They leave what looks like sawdust behind which provides an indication to where they are nesting.

Workers are 4 to 4.5 mm long yellow in color. When crushed, they produce a lemon scent that is often described as citronella. When moisture ants move indoors, they often nest in wood that is moisture damaged. They frequently find damaged wood in areas like bath traps. They sometimes nest inside walls where there is a plumbing leak. There have been cases of these ants nesting in damp soil in crawlspaces. In these situations, the workers made mounds of excavated soil in the crawl space.

Odorous house ants Sugar Ants can be very annoying as they frequently establish trails in your house along kitchen counters, cabinets, sinks, baseboards in their search for food. They can also be difficult to eradicate, since there can be several (or many) queens in several locations, the workers can all trail together regardless of their home colonies, the colonies frequently move from place to place, both inside  outside. 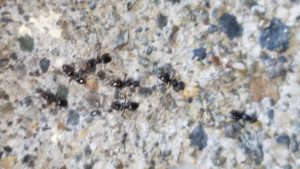 Sidewalk ants, or pavement ants, are familiar to everyone. They are commonly seen during summer months on driveways, patio slabs,  walkways. They will sometimes be seen pushing piles of sand  other debris from cracks from along slab edges. There are many different species, of different size  appearance.

Thatch ants are a large black ants sometimes confused with carpenter ants. They have a distinctive red head, which carpenter ants do not. Primarily an outside ant, they will occasionally invade structures. Most species of thatching ants are bicolored red or black .A few are all black. They are medium to large ants, averaging from 4–8 mm (3/16–5/16 inch) long, with a notch or depression on the top of the thorax when viewed from the side. They are polymorphic, that is, the workers vary in size within the same colony. Their reproductive swarms (winged males queens leaving the colony) occur in late summer to early fall.

Pharaoh ant infests almost all areas of a building where food is available  infests many areas where food is not commonly found. Pharaoh ants have a wide preference in the types of food consumed. In infested areas, if sweet, fatty, or oily foods are left uncovered for only a short period of time, one can likely find a trail of Pharaoh ants to the food. As a consequence, they cause much food to be discarded due to contamination. Also called, miscalled, sugar ants, grease ants, kitchen ants, and house ants.

The harvester ant behavior differs between each species, seen through their feeding and nesting habits. In addition, unlike many other little black ants that infest indoor structures, all species of harvester ants prefer not to invade houses and buildings, but will establish their nests around gardens or yards, often destroying vegetation.

Velvety tree ants make their nest in the crooks of trees. Depending on the location, they nest in oaks, sycamores, cottonwoods, pines. They also nest in the soil under rocks and inside logs or stumps. Colonies are usually very large. Normally the entire colony nests in the same place. However, sometimes there are satellite colonies  the workers move back  forth between the nests.

Velvety tree ants eat honeydew, nectar, insects. They tend small insects, like aphids, because they produce honeydew. It is common to see velvety tree ant workers moving around in lines or trails on the trunks of trees. They often use tree limbs branches to enter homes other structures.

When they move indoors, velvety tree ants often make their nests inside wall voids. The workers often build paper-like nests inside the wall voids. They also hollow out Sheetrock foam insulation for nesting  passages. If they find damp, decaying wood, they hollow it out to nest inside.